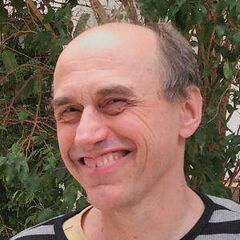 Jens Gustedt completed his studies of mathematics at the University of Bonn and Berlin Technical University. His research at that time covered the intersection between Discrete Mathematics and efficient computation, which also brought him the authorization in 1995 to apply for full professor positions in France in the domain of Computer Science. Since 1998, he is working as a senior scientist at the French National Institute for Computer Science and Control (INRIA).

Since his recruitment at INRIA, his research was focused on aspects of parallel and distributed computing, namely algorithms, models for coarse grained parallelism, distributed locking, scientific experimentation, modelling and the transfer to application domains.

His blog is mostly about programming in modern C, as is the contents of his book ["Modern C"]. For both, constructive feedback is highly welcome.

Since 2018, he is head of the ICPS research team of the ICube lab. He is also a member of the INRIA project team Camus that tackles compilation aspects of multicore architectures.

Since 2014, he is an expert in the ISO committee for the C programming language, [1] were he served as co-editor of the C17 standard. He has been heavily involved in the next version C23 to introduce for example lambdas (if possible type-generic) and a defer statement function type attributes, nullptr and improvements for integer types. Also he is an author and editor for the technical specification TS 6010 that will bring a more stringent design of a C memory model for aliasing that is based on provenance. Both these documents will soon be up for votes by the national body organizations (= ISO membes) and are scheduled for publication in 2023.